Easter weekend marks the start of the 2021 sailing season

Ever since the first doses of vaccine rolled out, the predictions have been made about the new sailing season. The optimists have been relying on the growing bookings and boat sales, claiming that this would be the best season ever because people are keen to sail and charter operators would not have enough boats to take onboard everyone who would like to join.

The pessimists, on the other hand, have been concerned about the third wave of the pandemic, slow bookings in past weeks and the reintroduction of lockdown measures in many European countries, all of which would cost us the off-season. What happens afterwards, remains to be seen. But it will not be great either. That is why we were all in anticipation of Easter holidays hoping to get a hint of what would really happen on the Adriatic.

The events in the past weeks were not optimistic. A fair number of people who had been planning to spend Easter holidays, or at least four to five days on a boat, either cancelled the reservation or postponed it until the autumn.

A certain number of team building events were cancelled as well. It was uncertain how many sailors, boat owners from other countries would manage to come on their own boats in marinas given the quarantine or multiple tests obligation upon their return. Even the weather was whimsical and unpromising. With Easter now behind us, we can say that neither optimists nor pessimists were entirely right.

Marinas regained life, especially ones on the Northern Adriatic coast that welcomed the boat owners who had arrived to freshen up their boats rather than sail off. The charter season has started as well. Modestly, though, but according to the data we received from the Ministry of the Sea, Transport and Infrastructure and the crew lists, in the 13th and 14th week of this year, that is to say, the week right before or during Easter, there were 630 domestic and 1,960 foreign sailors – 2,590 altogether. In total, in these two weeks about 450 boats were chartered. It is far less a number than we used to have in normal circumstances.

All things considered, even this result may be a good sign. We confirmed that having talked to several CEOs of biggest Croatian charter companies whose number of chartered sail boats varies from five to twenty but who believe that the number would grow significantly should there be a major step forward in pandemic control.

Apart from the usual epidemiological measures and regulations regarding entry into Croatia, when it comes to sailing, there are no restrictions. The waterfronts and marinas are ready, the buoys are scattered and fewer in number, many restaurants and cafes are open, but the food can only be served on the terrace and until 8 p m. The shops are open.

Anyway, the scenes such as this one from the early days of April showing five or less yachts tied up to the waterfront in the town of Vis over the Easter holidays, are likely to be our day-to-day reality for a little longer.

The publications for yachtsmen in eight languages

New looks for the new season 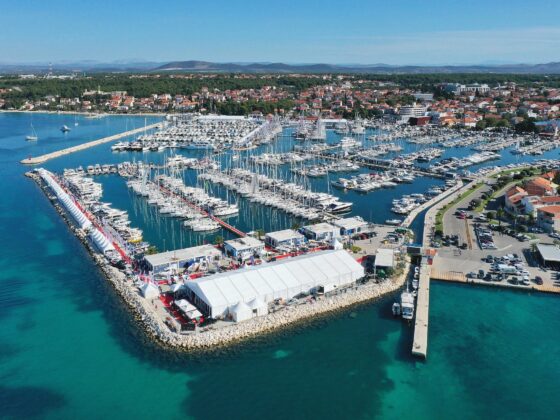 Biograd Boat Show on the way