The 700-metre long Rab waterfront, on the peninsula where the old town with its four towers is located, is one of the most scenic panoramas on the Adriatic. Add to that the fact that it extends for almost the same distance to the very end of Rab Harbour, and then along the opposite side of the harbour and the breakwater which protects it and it becomes clear that this is one of the largest waterfronts on the Adriatic islands. There is also an ACI marina within the harbour as well as five jetties for local boats, which take up most of the NE shore. However, there is not much space on the waterfront for ordinary sailors on motor boats or sailboats between 9 and 15 m in length. Namely, the southeastern end of the waterfront below the peninsula is reserved for passenger traffic, then come berths for various tourist and excursion ships, and right at the end are some berths for sailors. Most usually moor side on, which explains why there is only enough space for about ten boats. Sailors who do not want to go to the marina often moor side by side, use empty berths between excursion boats or the part of the waterfront reserved for passenger traffic, if the port authority officials allow it. On the other hand, the harbour is perfect for sailors with smaller boats, of whom there are many. Lošinj. The buoys off the NW shore of the harbour, where around 70 boats can moor, are intended for them too. The harbour is deep enough, except for its NE part, with depths of between 3 and 7.2 m. Although at first glance the harbour seems well sheltered, the bura is felt quite strongly and the jugo creates sea swell. Once you are moored on the waterfront you will find yourself at the very entrance to the old town. It is quite an experience walking along its three streets, Donja, Srednja and Gornja (Lower, Middle and Upper Street), visiting its fascinating churches and climbing its bell towers. There are several excellent restaurants in Rab and many interesting events take place there during the summer. The most famous is the three-day long Rab Fiera, which takes place at the end of July, evoking medieval Rab. 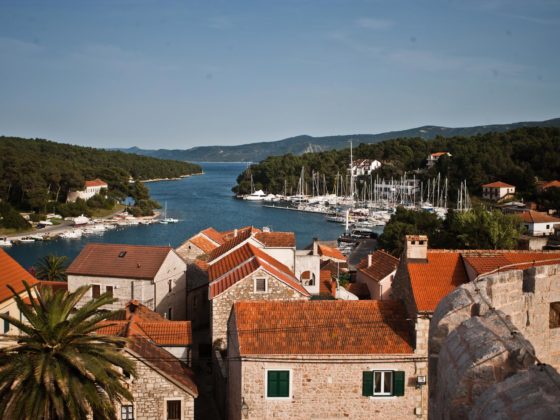