The distribution of the Adriatic islands is ideal for every mariner, especially under sail. With a few blank areas, they run along the entire coast from Rijeka to Dubrovnik. The distance between them is seldom greater than ten nautical miles, and they make myriad waterways and channels. The islands and the coastline count more than 1500 bays, coves, and harbours for mooring and anchoring or an overnight stay. These places are ideal for sailboats, but motor cruising or fishing rides are also a treat. Nothing is ever too far away, yet if you want, you can sail all day long. If the weather turns bad or mighty winds rise, there is always a place where you can find refuge. Just like any other sea, the Adriatic has its own perils. To enjoy the ride, you should know the winds, their patterns and behaviour, and observe the rules of safe navigation. Fortunately, weather is generally very favourable for navigation and sailing in the high season. This is the period of maestral (a.k.a maestro, a northwesterly) and tramuntana (or tramontana, a northerly) which make sailing pleasurable. The same goes for levanter (an easterly), and jugo (a southerly) is seldom strong in the summer. Even bora (a northeasterly) looses its strength, but you should always keep an eye on it and other summer windstorms. Navigation in such a variety of shores, coves, currents and local winds is always interesting. There is always some action on board. To get where you want, you always have to make sure that you’re still on course and adjust to the circumstances. In one moment you sail downwind and in the next you tack or have to manoeuvre through a narrow channel or a strait. The regime is just as variable for motor boats. The landscape is never the same. You can see desolate spots hit by hard winter boras, such as the northern coasts of the islands of Rab or Pag. Shores facing the open sea are usually lush, especially as you move down south. One moment you will brush along a thick pinewood such as those on Lastovo or Jakljan, and the next all you see will be brushwood and bare rocks. You will pass by or moor in typical Mediterranean ports as well as in small fishermen villages. You will often see solitary coves with a house or two. You will sea beaches changing appearance with the wind such as Zlatni rat (Golden Cape) on the island of Bol.

Island places are never the same and are worth visiting. Some towns such as Korčula, Hvar, and Vis date back to ancient Greece. Other places are of a more recent date, usually established as fishing ports or ports of larger island towns situated further inland. Many islanders lived from the land and built their towns and villages inland, usually on the slopes bordering fertile fields. Most of these places have preserved their genuine appearance and quality, and even though there are but a few residents left, you will be able to catch a glimpse of the times long gone.

The Island of Vis

The Island of Brač

The Island of Cres 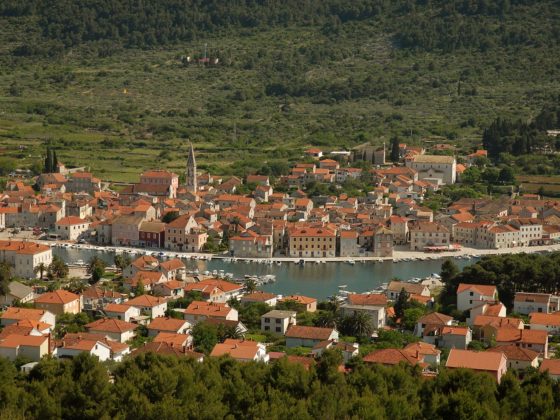 The Island of Hvar

In the heart of Europe